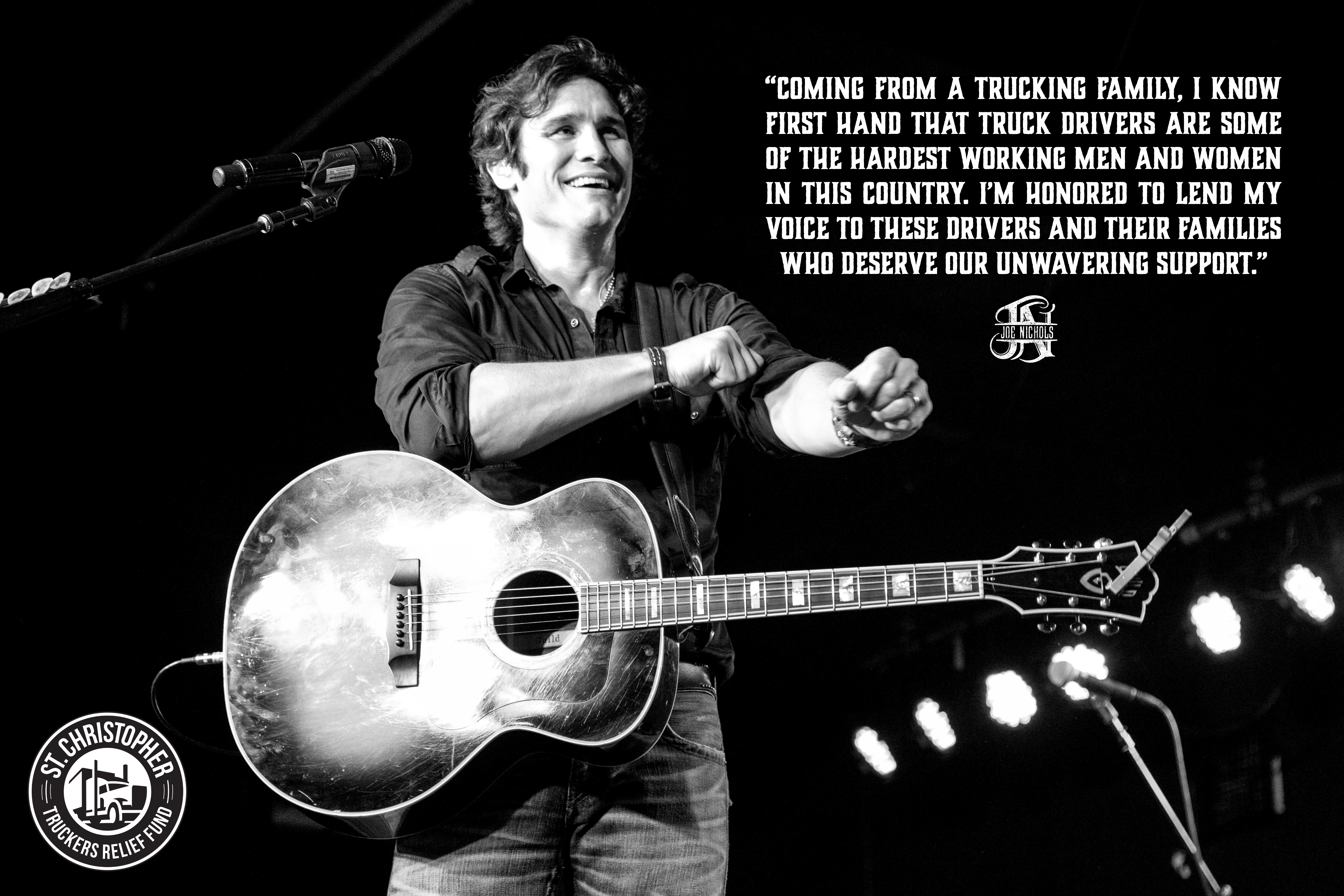 We’re teaming up with CMA and ACM award winning, 3 time Grammy nominated country music artist Joe Nichols to help raise awareness for our mission to help promote health and wellness for the 3.5 million truck drivers in the U.S., and provide financial support and guidance to drivers who are unable to work due to health issues or injuries.

“We’re so excited to be working with Joe especially given his personal connection to our mission,” stated SCF Executive Director Dr. Donna Kennedy. “We hope that by working with Joe and his team we can help raise the visibility of our organization’s mission in order to bring more help and support to the men and women who keep our country and our economy moving every day.”

“Truck drivers are some of the hardest working men and women in this country and they deserve our support. I look forward to doing anything and everything I can to help St. Christopher and their cause,” said Joe Nichols.

Truckers needing assistance from SCF may apply by clicking here. To donate to SCF’s mission to support truckers and their families in financial need, click here.

Multi-platinum recording artist Joe Nichols is one of Country music’s most praised traditional Country artists. His latest album NEVER GETS OLD is available now, a follow up to Nichols’ album CRICKETS, which debuted in the Top 3 on the Billboard Country Albums Chart and spawned the two multi-week #1, RIAA gold-certified hits “Yeah” and “Sunny and 75.” Nichols has six #1 hits and five Top 10 singles to his credit, including chart-toppers like “Brokenheartsville,” “Tequila Makes Her Clothes Fall Off,” and “Gimmie That Girl,” and Top 10 smashes like “If Nobody Believed In You,” “What’s A Guy Gotta Do,” “Size Matters,” and “I’ll Wait For You.”

The 3X Grammy nominee is the winner of the Academy of Country Music’s “Top New Male Vocalist” award, the CMT “Breakthrough Video of the Year” award, and the prestigious “Horizon Award” from the Country Music Association. Nichols is currently touring the U.S. performing his own headlining dates.

Joe Nichols’ father, Michael Nichols, was an over-the-road truck driver for 13 years when he was diagnosed with idiopathic cardiac pulmonary fibrosis in 1999, an incurable lung condition doctors at the time attributed to his exposure to diesel fumes during his career as a trucker. Michael died in 2002 at the age of 46 from complications due to his illness.

by Westwood One Podcast