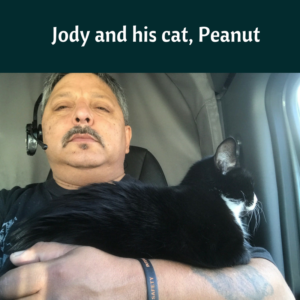 Jody Valenzuela began smoking at the ripe old age of 13. Now, at the age of 51, he has been tobacco free for over a year. Being smoke-free has changed Jody’s life and he wants to share his story with others, in hopes that it will offer encouragement and be the motivation that a driver needs to break the nicotine addiction.

Recently, Julie Dillon, talked with Jody to hear his story. Jody remembers, “People were always bugging me to stop smoking. The more they bugged me, the more determined I was to keep smoking. I’m a very stubborn person.” After about a month of no one hassling him, Jody made the decision that April 20th, 2016 would be the last day he smoked a cigarette.

“I walked into the Flying J in Knoxville, TN and bought my last pack of Marlboro Menthol cigarettes. I smoked every last one of them. I then took a picture of myself and put it on Facebook, letting people know of my decision”, says Valenzuela. By making his decision public, he made himself more accountable to others. Jody received many encouraging comments from people telling him not to give up. Facebook gave him a system of support that he would not have otherwise had.

We asked Jody what are some of the benefits he has experienced since making the decision to stop smoking. He said that has seen several physical changes in his body. Some of those are as follows: food tastes better, breathing is easier and he has lowered his blood pressure. Jody states that he can enjoy every day activities that others take for granted; such as playing ball with his dog and going for a hour-long swim. He now enjoys a good cup of coffee or bowl of fruit since he can really taste it. One additional benefit is the extra money he has in his pocket. He has saved approximately three thousand dollars in the last year or so!

While Jody’s dog doesn’t travel with him, his cat, Peanut is in the truck each day. He states that Peanut was also a motivating factor in his decision to quit. Peanut had been abandoned. “She came to me for help and looks to me for protection. How could I fill her lungs with smoke every day?”, he asked himself. He just walked away from cigarettes, cold-turkey. Now, when he walks into a store, he can’t stand the smell of cigarette smoke. He never knew how bad it smelled when he smoked.

It wasn’t easy for Jody to stop smoking and it wasn’t easy for the people that he was around. He was a bear for awhile. The addiction is real. There are so many people who are in the same or a similar position to Jody when it comes to trying to stop smoking. Just like with anything, giving it up is not going to be an easy process, especially if you are so used to it. But there is always a solution.

It’s tough but it can be conquered. His final thoughts for all drivers are “If I get to spend one extra week with my family because I quit smoking, then I AM A WINNER!”