Truckers step up as coronavirus pumps demand for necessities, but face mounting obstacles 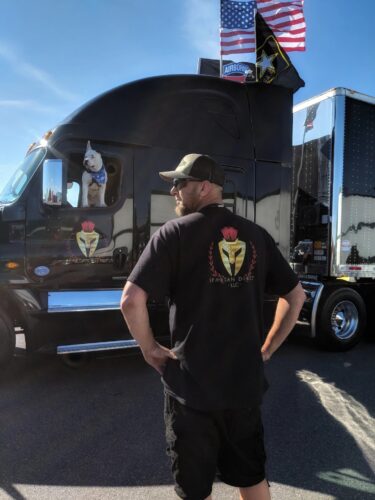 For the fourth time since the beginning of the novel coronavirus crisis, James Rogers was hauling a load of emergency supplies the 2,109 miles from a Procter and Gamble facility in Illinois to Seattle.

In a semitrailer loaded with soap, he had shaved about 24 hours off a run that typically takes three and half days.

Rogers’s run begins in Edwardsville, Ill., a small city outside St. Louis. With his dog Sergeant at his side, he has been taking his 2015 Freightliner Cascadia west on Interstate 70 through Kansas City, then up to Sioux Falls, before picking up Interstate 90 and heading over the mountains to Seattle.

The route is normally quiet. Now, Rogers, 43, said it’s absolutely desolate — even through the cities.

With people across much of the country ordered to stay home to slow the spread of the virus, truckers are still plying the highways. It’s unsung work, but a job that those in the industry say puts them on the front lines of the nation’s response.

“You can’t stop the supply chain. You just can’t,” Rogers said. “The country’s already in a state of mental panic, and if the supplies stopped, that’s going to lead to further panic.” 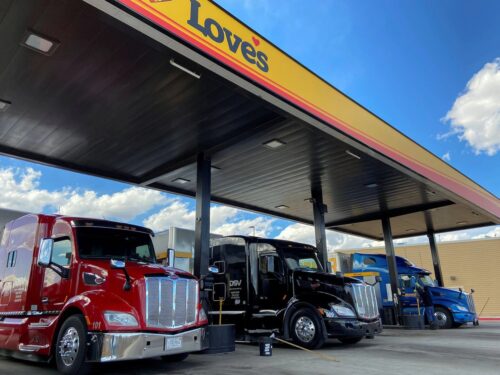 Bare supermarket shelves were one of the first signs of how the virus was upending the normal social order. The job of keeping them stocked has been a jolt to the trucking industry, which had been showing some signs of sluggishness before the outbreak began.

The surge is showing in shipping prices. DAT, a freight marketplace, reported that rates for so-called spot loads were up in recent weeks, driven by the demand to keep stores restocked.

The Federal Motor Carrier Safety Administration, which regulates trucking, has waived rules limiting how many hours drivers can be on the road for the kind of loads Rogers has been hauling in an effort to ensure those loads of soap, toilet paper and cleaning supplies can keep moving.

Traffic-free roads have also kept trucks moving quickly. The American Transportation Research Institute analyzed GPS data and found that trucks were speeding through chokepoints that normally slow them to a crawl. An Atlanta junction known as Spaghetti Junction normally sees trucks pass through at 15 mph during the afternoon rush hour; last week they were moving at 53 mph, the organization said.

But drivers, executives and analysts say they don’t expect the economic boost to last and that the industry will suffer if the economy as a whole contracts sharply in coming weeks as forecasters expect.

“This is the storm before the calm,” said Bob Costello, chief economist for the American Trucking Associations. “If you buy 50 cans of soup, at some point you’ve got to start eating the soup.”

Already, port traffic has slowed and the closing of major auto factories has also dried up another source of truck freight.

As the virus has taken hold, truckers say they have had to contend with new challenges on the road: State governments that have ordered rest areas closed, customers who are leery that they might spread disease and fewer places to find something to eat or get a shower.

Bob Stanton, 62, said he finally had to ask his employer for some time to go home after going a week without eating a hot meal. Some places where he was being loaded or unloaded wouldn’t allow him to use the bathroom.

“We’re being treated like excrement by many of the places we have to pick up and deliver,” Stanton said. “Every place I go I have to fill out a covid-19 exposure form before they’ll let me on the property.”

Organizations representing truck drivers and trucking companies have been appealing to President Trump and other federal officials for more help. The Owner-Operator Independent Drivers Association recently asked for support and for rules to be suspended, including pausing drug screening and many safety inspections. The American Trucking Associations, which represents businesses, sent a similar letter to the president. The groups say officials have been responsive. 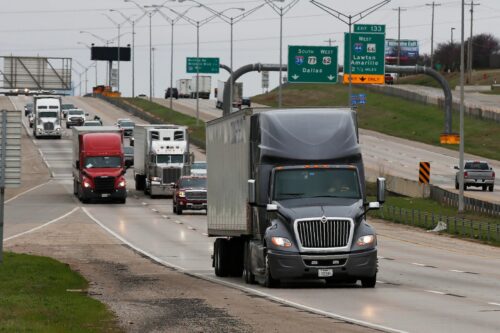 Trucks travel along I-35 in Oklahoma City, Friday, March 20, 2020. Nationwide as rest stops and restaurants close, truck drivers are finding it difficult to locate prepared food items and face challenges including parking and access to drive through only locations. (Sue Ogrocki)

Last week, Trump responded to a tweet by the associations about the work truckers were doing, saying, “THANK YOU! #ThankATrucker.”

A spokesman for the federal trucking agency said it has taken unprecedented steps to keep freight moving by issuing its first nationwide emergency declaration and seeking to address the industries’ concerns with state governments.

Derek Leathers, chief executive of Werner Enterprises, one of the nation’s biggest trucking companies, said ensuring his drivers continue to have access to food and places to rest has been a priority. The company has been updating its drivers by video and ensuring they have supplies to keep their cabs clean.

“Everybody’s patience is being tested but people are responding,” he said. “These men and women who are driving trucks across America really are heroes.”

Truckers have also been advocating for themselves. After Pennsylvania announced last week that it would close its rest areas as part of its efforts to slow the virus’s spread, the state transportation department’s Facebook page was stormed by drivers threatening not to make deliveries to the state in protest.

Alexis Campbell, a spokeswoman for the department, said the state quickly reassessed and decided to partially open some of the rest areas to continue serving truckers.

“We’re happy to be flexible and revise,” she said. “We’re not just going to stick our feet in the mud.”

As the public health crisis continues, truckers face the question of what to do when they are infected with the virus hundreds of miles from home.

Truck drivers spend much of their time alone and can sleep in their cabs, and Stanton said they’ve been taking small measures to protect themselves: Using their own pens to sign forms, carrying hand sanitizer and trading cans of Lysol spray among themselves.

But truckers are on average older than the workforce as a whole and a 2014 survey found high rates of obesity and smoking among them.

Most doctors’ offices, meanwhile, don’t have anywhere to park a truck. Getting seen can mean parking elsewhere and taking a cab, and the prospect of losing hours of driving time.

UrgentCareTravel, which runs a network of 13 clinics at Pilot and Flying J rest stops to cater particularly to drivers, is hoping to find a more convenient way to help truckers. Mitch Strobin, a marketing executive at the company, said it rolled out a remote evaluation system for truckers recently as a way to provide an initial screening wherever someone is in the country.

For truckers who do fall ill and can’t work, the St. Christopher Truckers Relief Fund is stepping up fundraising in hopes of helping as many people as it can. The nonprofit helps cover housing and utility costs for drivers who are out of work. Shannon Currier, the organization’s director of philanthropy and development, said for some drivers, spending a month off the road to recover might mean losing their truck.

“We know these drivers are on the front lines,” Currier said. “There’s going to be exposure.”

Rogers, who has now finished a fifth Illinois-to-Seattle run and plans a sixth this week, said the opportunity to respond to the crisis was one of the reasons he got back into trucking following a difficult few years after he left the Army. He battled post traumatic stress and drug abuse. Then in 2017 he won a truck and started his company, Spartan Direct.

“I needed to find a way where I could continue to serve my country,” he said. “Coming back into trucking has allowed me to fulfill that spot.”

Work began picking up in early March, Rogers said. He started noticing demand for loads of supplies that needed to be taken to Washington state, where the virus gained an early hold in the United States, “just as quick as we could get back to the supplier.”